Ron Thiessen, CEO of Northern Dynasty Minerals Ltd. (TSX:NDM; NYSE: NAK), has one of the toughest jobs in junior mining.

Last week, NDM’s 50% partner on Pebble, Anglo American, backed out of the partnership after spending north of $540 million on the project, leaving NDM on its own to develop the proposed copper-gold-molybdenum mine.

Not surprisingly, NDM’s share price took it on the chin after the news: 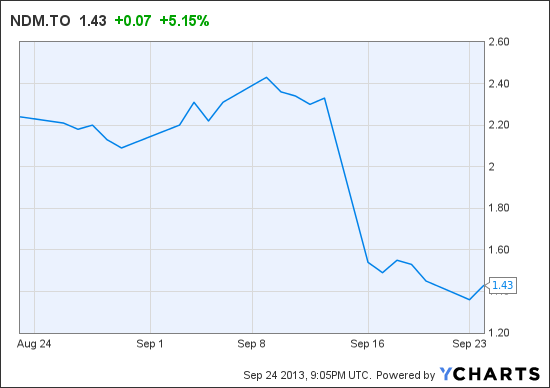 “I prefer to look at it this way: They invested $541 million dollars. We did a $550 million financing, we didn’t issue any stock, and we own 100% of the project, which gives us a lot of optionality.”

Thiessen discussed issues and opposition the company is working to overcome in Alaska. Over $150 million has spent on environmental and socioeconomic studies, Thiessen says, with $75 million focused on fisheries.

“Fishing and mining can co-exist, and the Alaskans can have both.”

Despite the weak market for mining equities, Thiessen believes metals prices are more than enough to justify putting pebble into production.

Northern Dynasty’s share price is cheap, too, according to Thiessen.

Northern Dynasty will provide a corporate update later this month or in early October.