“This is an extraordinary drill hole,” said Robert Friedland, executive chairman. “The 90-metre thickness of the intercept, which roughly is the same height as a 30-storey building, is unprecedented at Flatreef and I believe it also is without precedent in an underground platinum discovery in South Africa.  The scale of the mineralized intercept has obvious implications for the contained PGMs and base metals in the open-ended Flatreef poly-metallic discovery. The combined grade and thickness of the PGMs and base metals mineralization seen in this hole far exceeds anything we’ve previously encountered in all of our years of delineating resources on our Platreef Project.”

The mineralized zone intersected by TMT006 was encountered from a depth of 803.43m to 894.07m and was located roughly 360m south of the location of the bulk-sample shaft.  Two of the mineralized reefs which comprise the Flatreef Discovery; T1M and T2, are adjacent to eachother in this area.  The company has drilled other holes near TMT006 and have intersected mineralization from 21m to 48.8m in thickness, however, TMT006 is not only the longest interval, but it appears to have the best continuity of grade across the entire intercept.

Ivanhoe has 14 drill rigs onsite, drilling around the bulk-sample shaft area which is where the company anticipates mining during, at least, the first five years.  Nine of the drills are working on metallurgical and geotechnical targets and the other five drill rigs are targeting a zone to the southeast of Zone 1 which has potentially contiguous high-grade mineralization there. 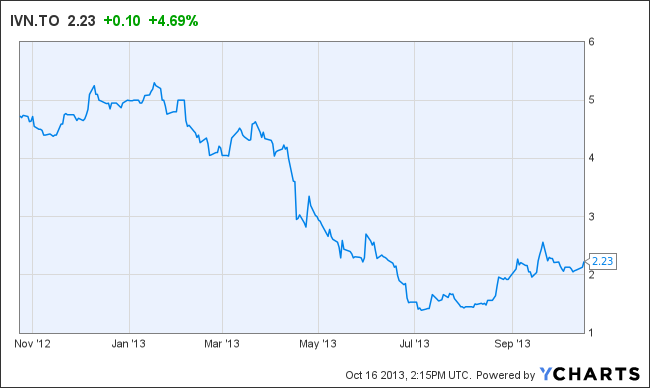 Their current program is roughly 70% complete with 24,759m being drilled to date.  Robert Friedland has been active on this project since 1998 and has drilled of 700,000m at Platreef.  The company expects to complete their drill campaign by mid-December.  Sinking of the first shaft as well as some of the lateral drifts will cost approximately $80 million which is to be funded from their $180 million budget.   The company and its minority partner, JOGMEC (8% interest in Platreef), expects to complete a development plan by early 2014 which is anticipated to show a 12 million tonne per year underground operation.

Related: Hype and Technical Analysis Should Support Ivanhoe Mines at These Prices