With gold set for its first annual decline since the year 2000, Goldman Sachs, the outspoken pessimist of the gold markets, put out a report summarizing their expectations for third quarter earnings.  The focus of the piece was Europe, Middle East and Africa (EMEA) gold miners and was titled “3Q earnings previews: Lower gold price impacts results, companies to focus on self-help”.  It is important to remember that the last time Goldman put out so many pessimistic reports on gold was in April 2013, at the same time the firm was actually loading up on gold as they helped force the price lower.  Over the months that followed their last sell recommendation on gold, they bought 3.7 million shares of the GLD (see Is Goldman Sachs About to Back Up the Truck on Gold?).

With their potential motivations in mind, we will continue the summary and analysis of their report.  Goldman sees the lower gold price setting the stage for the worst quarter yet for the gold miners.  Goldman’s only buy rating in their junior peer group in the EMEA space is on Endeavour Mining (EDV:TSX).

Below is a summary of the most pertinent points made by Goldman:

Goldman likes EDV and sees a straight-forward third quarter.  This is important because last quarter was filled with asset write-downs which helped push the stock lower.

Here’s the YTD chart of EDV: 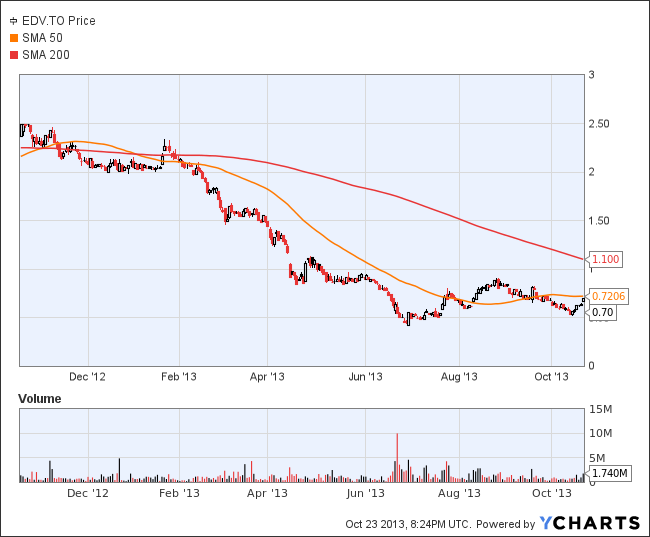 Goldman is forecasting a 12% increase in production driven by growth at the Tabakoto mine which they expect to grow by 36,000 ounces quarter-over-quarter.  Tabakoto is located in western Mali and the company expects to produce 126-131,000 ounces from that mine at cash costs of $880-$920 per ounce.  The company also operates the Nzema mine in Ghana which is a 6,500tpd open-pit, SAG/CIL operation with 2013 production forecasted to be102-107,000 ounces at $850-$900 per ounce cash costs. On October 16, 2013 the company announced it had commenced mining operations at its next pipeline asset, Agbaou, which is located in Cote d’Ivoire.  Agbaou is expected to add 100,000 ounces of gold production per year.  The team who built the Nzema mine has been building the Agbaou mine which is now at 90% completion.  The company also has a smaller (87-92,000 ounces per year) Burkina Faso gold mine called Youga.

Goldman is expecting an update on when a feasibility study for the company’s next 150,000 ounce per year producer, Hounde will be out which is currently guided for Q4/2013.  Also, they are watching for an update on the mining agreement made with the Government of the Cote d’Ivoire in relation to the Agbaou mine.

On the back of these positive developments and expectations, Goldman expects total company production to grow 12% quarter-over-quarter to 84,600 ounces and EBITDA to grow 27% to $24.4 million.  The company is guiding 2013 annualized production to come in around 320,000 ounces and growing to over 400,000 ounces by the end of 2014.  The company is sitting on $150 million in cash with $300 million of a $350 million debt facility drawn.  The company is ontrack for its 2013 guidance and is also fully financed for remaining Agbaou capex and cost-saving initiatives.  Goldman expects EDV’s free cash flow yield to outpace the peer group growing to over 24% in 2015 (compared to 10.3% for the peer group).

The main risks to EDV’s return, as Goldman sees it, is a decline in the gold price and social and political unrest in Mali.

We are long EDV.  This is NOT advice.  Due your own due diligence.