Canacol plans to spend $117 million of the $150 million in Colombia (Photo: REUTERS/Fredy Builes)

The company is planning to drill 36 gross development wells (8 net wells) and work over an additional 13 existing wells in Colombia and Ecuador.  Canacol’s management wants to focus on oil production growth in high-netback fields including Labrador, Leono, Mono Arana and Libertador-Atacapi.

Canacol is also planning on drilling 11 gross (7.2 net) exploration wells on blocks in Colombia and Ecuador targeting 89 million net boe unrisked of prospective oil and gas resource.  They will focus on the LLA 23 block where they had recent successes including the Labrador and Leono oil discoveries and the Cano Los Totumos block in the Llanos Basin of Colombia.

Charle Gamba, President and CEO of Canacol, stated: “For 2014 the corporation will focus on 1) building out production from the recent Leono and Mono Arana oil discoveries in Colombia and from the Libertador-Atacapi fields in Ecuador in order to continue to deliver strong production growth, 2) executing a significant oil and gas focused conventional exploration program in Colombia targeting relatively low-risk prospects on its blocks in the Llanos, Upper Magdalena, Lower Magdalena and Caguan-Putumayo basins to set up production growth for 2015 and beyond, and 3) continuing to derisk its extensive shale oil position via the flow testing of the La Luna shale in the Mono Arana 1 well and additional new drills on our blocks in the Middle Magdalena basin to increase the value of the 250,000 net acres the corporation controls in this play.”

Canacol exited 2013 with 10,550boe/d of average production which consisted of 7,474boe/d of oil and 17.8Mscf/d of gas. This represents a 60% to 40% oil to gas production ratio.  The company wants to increase their exposure to more light oil in 2014 which would be of added value in Colombia given the need of some of the heavy oil producers for diluents.  Remember, that was a key reason for Pacific Rubiales’ takeover of Petrominerales late last year. 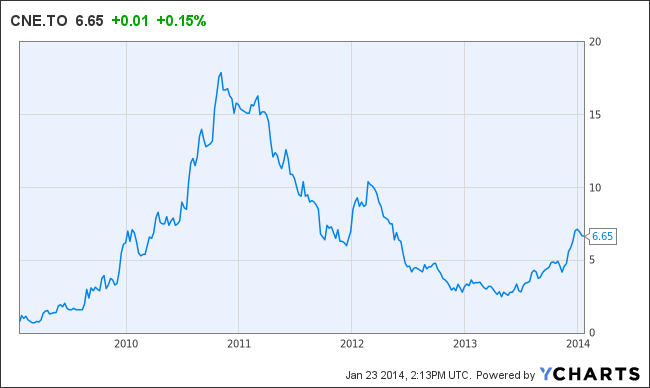