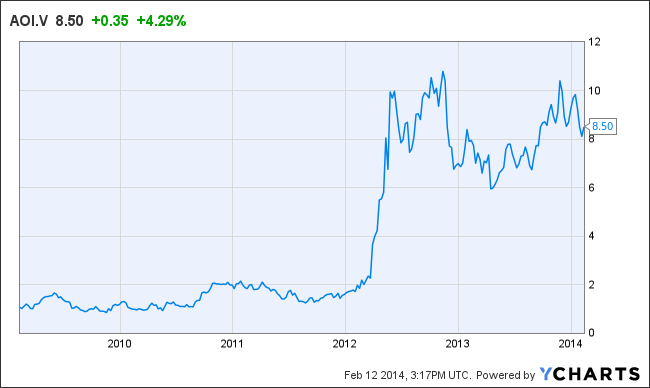 Lukas Lundin’s oil exploration vehicle, Africa Oil (AOI:TSX), is planning to drill at least 20 exploration and appraisal wells in the South Lokichar basin which will include exploration wells targeting 4 new oil basins.  This program is fully funded as the company raised over $450 million last year in the largest bought deal on the TSX Venture exchange.  The South Lokichar basin in Northern Kenya has hosted seven consecutive oil discoveries and there are currently three drill rigs and one test rig operating there.  Africa Oil’s 50% operator partner is Tullow Oil PLC.  The company has also provided an update on its current activities with the seven drill rigs it currently has turning.

The Etuko-1 well has successfully flowed light 36-degree API oil from three zones at an average rate of 550bpd.  There were additional pay zones identified in the Auwerer sandstones but were unable to be evaluated due to a large hole size (shallow in the Etuko-1 well).  The rig was moved slightly and will now drill a 650m well to evaluated this upper 200m interval.

The company spud the Emong prospect well on February 5th and is targeting high-quality Auwerwer sandstones.  The Emong-1 well is located 6km from the Ngamia-1 discovery and the Emong prospect is fault offset and up dip from the Ngamia discovery.  Emong will take 40 days to drill and is targeting a depth of 1,500m.  The gross best estimate of prospective resources for Emong are 242 million barrels of oil based on a third party independent resource assessment. Due to the huge success in Kenya, the partnership is working to complete field development studies (Photo: Africa Oil Corp.)

Also spud a few days ago was the Sala-1 well on Block 9 in Kenya.  Africa Oil operates this block with its 50% joint venture partner Marathon Oil.  This prospect is up dip fromt eh Bogal-1 well which was drilled in 2010 and appeared to find gas accumulation near the 1988 Ndovu-1 well.  The unrisked prospective resources for Sala are approximately 400 million barrels of recoverable oil based on a third party independent resource assessment. The well has a planned total depth of 3,450 metres and is expected to complete by end April, 2014.

Keith Hill, President and CEO of Africa Oil, commented: “We have a very exciting exploration and appraisal program set out for 2014 which will see us complete over 20 wells. Currently we have seven rigs running and after releasing one in midyear will have six rigs running full time through the remainder of the year. Our program has three objectives, to appraise the existing key discoveries, to drill out the remaining prospects in the South Lokichar basin and to open at least one of the four new basins being tested along trend.”

Due to the significant discoveries made, the company and Tullow Oil have agreed with the Kenyan government to begin field development studies.  The two are involved in a pre-FEED study for an export oil pipeline.  The current ambition of the government of Kenya and the joint venture partnership is to reach project sanction for development, including an export pipeline, in the period 2015/2016.