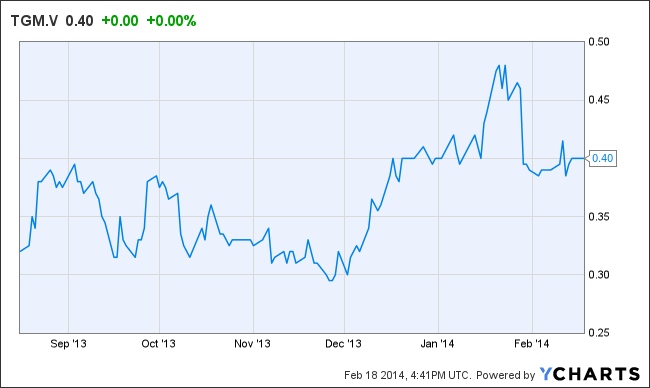 True Gold Mining (TGM:TSXV) has support from some of the biggest and brightest resource investors, including their Chairman Dr. Mark O'Dea, Canadian mining behemoth Teck Resources and giant US mutual fund Liberty Mutual.  Today, the company announced it has closed a total of $51.9 million in equity.

This financing makes the company's flagship Karma gold project located in Burkina Faso, West Africa, principally financed on the equity side.  According to the December 2013 feasibility study, the Karma project has a price-tag of $131.5 million of which potentially $70 million (including warrant exercise) is now financed via equity. The company closed its $42.9 million bought deal financing which was completed at $0.40 per unit with each unit consisting of a share and a half warrant exercisable at $0.47 until August 18, 2014.  The warrants could bring in another $30.4 million.

True Gold also closed the first tranche of their non-brokered private placement with Liberty Metals and Mining (True Gold's largest shareholder) for their pro-rata amount of the raise, roughly $9.9 million (of which $8.6 million is currently closed).  They expect to close the remaining $1.3 million later today.

The bought deal was led by RBC Capital Markets.  The 52.6 million warrants issued under the financing will commence trading on the TSX Venture on Feb. 18, 2014, under the trading symbol TGM.WT.

"This financing structure addresses the equity component of True Gold's project finance needs and creates a pathway to production. With $70-million in cash and more than six months into the project debt process with our lead arrangers, we are positioned to begin construction of Karma in the second half of 2014. In the meantime, we are advancing barrage construction, finalizing detailed engineering and design, and continuing resource expansion efforts through ongoing drilling," said Mark O'Dea, executive chairman, True Gold.

The company is now six months into discussions with their debt syndicate to coordinate the remaining funding necessary for the Karma project.  This should amount to less than $70 million and would represent less than 50% debt on the project.  The project is the type lenders like, with strong margins (0.89g/t gold in open-pit, heap leach) and good payback (1.4 years at $1,250/oz gold price).