International Enexco (IEC:TSXV) has announced it has hit the thickest and highest grade hole to date at their Mann Lake project located in the eastside of the prolific Athabasca Uranium Basin.  The ~$15 million market cap Enexco holds a 30% working interest and is partnered with two of the largest uranium producers in the world, Cameco (52.5% operator) and AREVA (17.5%), on the project.

The companies believe this latest hole represents a new discovery footwall to the western conductor in the northern half of the project.  Cameco, as operator, is now reviewing their drill targets and will revise the plan to put more of the three drills rigs’ emphasis on this new area.

Arnold Armstrong, President and CEO of International Enexco, commented: “We are extremely excited by the strong mineralized intercept from hole MN-060 at Mann Lake. This is one of most prospective areas of the eastern Athabasca Basin, and we look
forward to receiving further results throughout the ongoing drill campaign.” One of Cameco’s largest exploration programs is on the Mann Lake project (Source: Cameco Corp.)

The Mann Lake project, which is located roughly 25km southwest of Cameco’s McArthur River mine and 20kms northeast of their Millennium deposit, is undergoing a 2014 winter drill campaign which is targeting certain mineralized conductors.  Today’s release represents the eighth hole released as part of this season’s program and continues to target the 6km long ‘C’ conductor.

Cameco and the other partners outlined an 18-hole, 13,000m winter program of which 8 holes have been drilled and 2 are in progress.  The program is slated to cost $2.9 million with International Enexco’s pro rata amount being $870,000.  They expect the program to finish by early April 2014.

Although the mineralization is significantly deeper than those many investors are used to after watching the success seen in the Patterson Lake discovery (today’s intercepts started at 687.6m deep), this type of mineralization is what Cameco and AREVA have built their portfolios on and are very familiar with.

Cameco and AREVA have been rumored to show interest in the Patterson Lake area play, but they have yet to make a significant move (not to say one isn’t coming).  Their bread and butter remains the deeper, high-grade, underground mines on the eastside of the basin such as McArthur River and Millennium.

The Athabasca basin is essentially a bowl with uranium mineralization typically being found deeper the closer towards the centre you go (ie: away from the edges of the basin).  The Patterson Lake area discovery, on the other hand, appears to be a completely different formation which is still in its infancy in terms of understanding its structure.

International Enexco also holds a joint venture on the Bachman Lake Uranium project with Lukas Lundin’s Denison Mines (20% IEC, 80% Denison).  Denison is one of the largest shareholders of International Enexco, holding 9%.  Ron Hochstein, President and CEO of Denison is also on the Board of Enexco.

Shares were up 20% to $0.42 per share at the time of writing.  The stock is quite volatile with a small public float (between management and insiders roughly 40% of the 42.7 million shares are held). 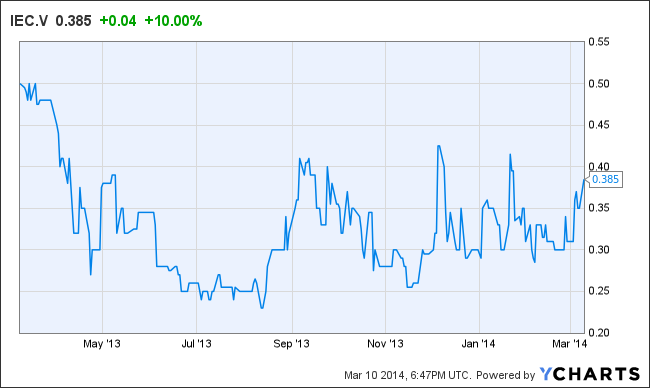 RELATED STORIES
A closer look at dissident slate for Fission Uranium board
November 16, 2015 9:57 AM
Skyharbour Resources (SYH:TSXV) Secures Financing For Next Year and Strengthens Advisory Board
March 07, 2014 11:52 AM
Canada to Ease Foreign Ownership Restrictions on Uranium Mines: Reuters
October 18, 2013 11:23 AM