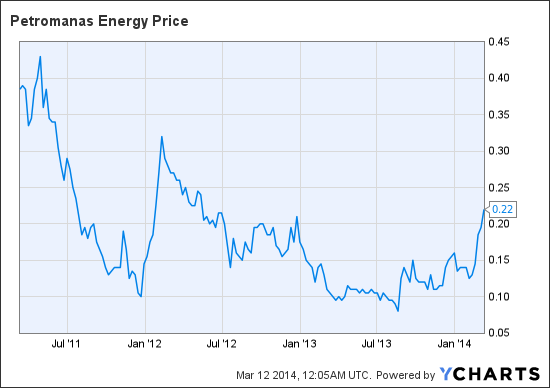 Petromanas Energy (PMI:TSXV), which made a potentially massive onshore light oil discovery in Albania with their partner, the super-major Royal Dutch Shell, has updated the market on the drilling progress of their highly anticipated Molisht-1 well.  The well is targeting a depth of 5,500m and has been successfully drilled to 3,270m.  The company has since logged the upper carbonate zone and cemented the casing to this depth.

Importantly, this casing is below the Berati fault, which is believed to have caused the delays and cost overruns associated with their Shpirag-2 well.

The Molisht-1 well is estimated to cost roughly $62 million (gross) of which Petromanas will only be on the hook for $3 million.

The company also announced the results of a 30-day pressure buildup test completed at Shpirag-2, the discovery well. Petromanas and a third party data interpretation group believe the reservoir they encountered at Shpirag-2 is overpressured, which means the reservoir could lend itself to commerciality and deliverability.

Petromanas plans to complete longer-term testing to get a better idea of the productivity of the well.

Shpirag-2 encountered strong oil rates, stable gas-oil ratios and low H2S content; with that in hand as well as significant seismic data, plans for the Shpirag-3 (to be drilled 3km south of Shpirag-2) are progressing. The company plans to start drilling Shpirag-3 as soon as the Molisht-1 well reaches its target depth, which is expected in Q3 2014. “Based on the results from the pressure buildup analysis at Shpirag-2, we are seeing indications of many of the reservoir characteristics necessary to support deliverability and production from a deviated wellbore that would access the interconnected fracture network that we believe exists in the target carbonate reservoir,” said Glenn McNamara, CEO of Petromanas. “With the positive data we have on the Shpirag-2 discovery and additional seismic becoming available on blocks 2-3, near-term next steps include obtaining an updated resource report generated by an independent third party in second quarter 2014 and completing the drilling and testing of Molisht-1 in third quarter 2014.”

Given the challenges the company faced while drilling Shpirag-2, management still needs to prove it can drill successfully into these structures.  Molisht-1 will be a key catalyst for the company if they can deliver it cheaper and more effectively than Shpirag-2.

Given Molisht-1 is located roughly 18km to the south of the discovery well, some investors believe the possibility exists for this to be one large structure which would represent one of the most significant onshore light oil discoveries in Europe in recent history.

Disclosure: We are long PMI.v which makes us biased. Always do your own due diligence.