Nord Gold has agreed to option an initial 50.01% interest in Columbus Gold’s (CGT:TSXV) Paul Isnard project for $30 million.  Nord Gold is listed in London, but is 85% owned by the Russian billionaire owner of conglomerate Severstal, Alexei Mordashov (net worth ~$12 billion).  Nord Gold operates nine mines globally and produced 924,000 ounces of gold in 2013.

Under the terms of the agreement, Nord Gold can earn 50.01% of the Paul Isnard project by spending at least $30 million over the next 3 years and by completing a bankable feasibility study.  Nord Gold will pay $4.2 million cash by May 21, 2014.

Nord Gold expects to spend $11.8 million on the project this year alone (combined with their $4.2 million cash payment, this represents nearly half of the total work commitments within the first year).

Robert Giustra, CEO of Columbus Gold: “This agreement is exceptional not only by its requirement for an experienced and world class mine developer to fund a considerable amount of spending but also for the fact that Columbus Gold shareholders retain half the project at feasibility. In addition, the deal provides Columbus Gold with the option to participate in mine construction or to delegate it to Nord Gold for a resulting significant and valuable equity interest for Columbus Gold shareholders in a large producing mine.”

Columbus has the option to fund its pro-rata (49.99%) of the mine construction if elected by Nord Gold to do so.  Alternatively, they can allow Nord Gold to solely fund the capex and will be diluted to 25% based on a straight-line formula depending on the 2P reserves.

Nord Gold has agreed to pay Columbus a 10% management fee as operator of the project (roughly $1 million to be paid to Columbus over 2014 based on budget).  The London-listed gold producer has also agreed to a standstill agreement whereby they will limit their ownership to less than 20% of Columbus and will not solicit proxies over the option period.

The Paul Isnard project hosts the Montagne d’Or deposit which currently hosts a 5.37 million ounce gold deposit in the Inferred category (117.1Mt at 1.43g/t gold).  Columbus is currently working on a 26,600m, 135 hole drill program at the project, mainly to bring upgrade the Inferred resource.  The deposit has been drilled from surface to a vertical depth of 250m.  A strike length of 2.3km has been identified and trends east-west and dips steeply to the south.

The gold here is associated with disseminated, stringer and semi-massive sulphide mineralization of volcanic origin. The higher grade gold is found in chlorite bands with pyrite-pyrrhotite-chalcopyrite seams and stringers.

Investors like these types of deals whereby a larger company comes in to a fund a project for reasonable option terms.  We view this as positive for Columbus shareholders given the current cash balance (pre-Nord Gold transaction) of less than $1 million and the fact the dilution they face for the value that gets added to the project is fair.

Nord Gold is a sophisticated group which successfully put a gold mine into production on time and on budget in Burkina Faso recently.

Shares in Columbus performed well last year, despite the weak gold environment as the company continued to de-risk their Paul Isnard project.  Here’s the 12-month chart: 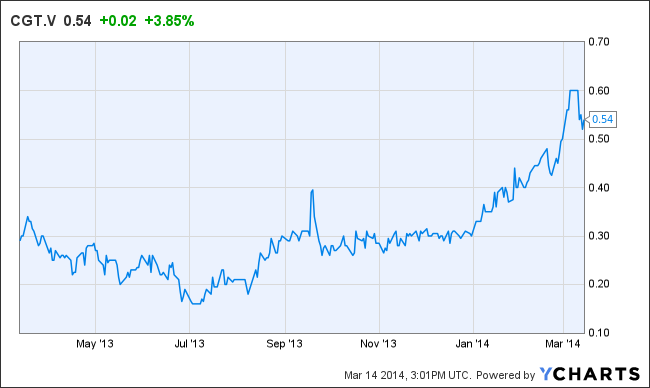