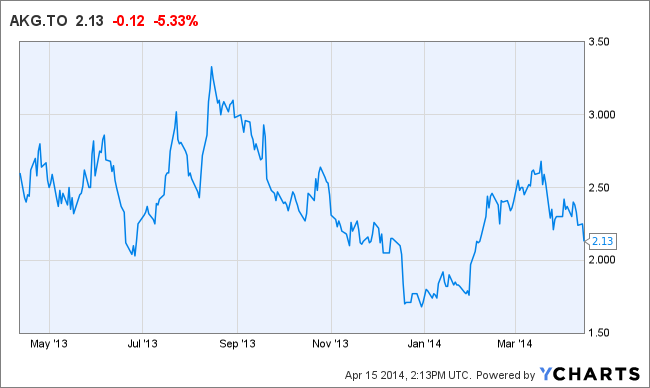 As the company promised, Asanko Gold (AKG:TSX) has finalized and amended their $150 million project debt facility with Red Kite which is inline with the previous terms.   Final definitive agreements are expected by the end of Q2.  When Asanko merged with PMI Gold late last year and the combined entity revised their plan to build both projects under one mine in two phases; phase I being the former PMI asset, Obotan and phase II being Asanko’s former Esaase mine.

It always seems like gold companies hit milestones when the gold price is taking it on the chin (gold down ~$30/ounce at time of writing).

The $150 million loan makes the company fully-financed for phase I of their project which is estimated to produce over 220,000 ounces of gold in the first 5 years (average of 200,000 ounces LOM).

There are two pieces to the loan; a $130 million project facility and a $20 million cost overrun facility.  The overrun facility is available to the company should they need it in the case of capital cost overruns.  The loan is secured against phase I assets only and will be guaranteed until phase I is completed.

The $130 million bears interest at LIBOR (minimum 1%) plus 6% and has a four year quarterly payback schedule without prepayment penalty.  The company is required to drawdown a minimum of $60 million this year.  The overrun facility is pricier at LIBOR plus 10% and 4 million 2.5 year warrants (at 25% premium to 20-day VWAP).

There is also an offtake agreement for 100% of the gold up to 2.2 million ounces which can be bought by Red Kite at spot over quotational period.

The loan facility has no gold hedging provisions, cash sweep requirements or other restrictions which are often associated with these types of facilities.  This allows the company to continue with their growth strategy by enabling them to more easily acquire other assets or companies.

Management continues to complete milestones on time.  They remain on track for a final production decision in Q3 and construction by Q4.