Vancouver shell company wakes up to $1.3 million a month in royalties Luck has always played a role in the natural resource exploration business.

Tiny companies toil away and turn over multiple projects in the hopes of finding something with real value.

Robert Friedland’s Diamond Fields International was looking for diamonds on the sea floor of Namibia when an afterthought work program it funded in Newfoundland found a nickel deposit it sold a year later for $4.5 billion.

I’ve read that Friedland was barely aware of the Newfoundland projects before the discovery.

A more recent example has come up where a company with a project it hasn’t really mentioned in ten years has started to cash flow over a million dollars per month into the once tired little public company that owned it.

David Cohen and Ian Rozier’s Newport Exploration Ltd. has been focused on mining interests, however since 2002 it has kept a 2.5% royalty on oil and gas acreage in Australia’s Cooper Basin.

Fast forward 12 years and the checks have started rolling in, $3.834 million in the first quarter of 2014 alone.

The company cautions that it cannot speculate on future revenues as they are in the dark to the development plans of the assets, only commenting that all future royalty payments will be reported in Newport’s financials.

Speculative investors have more than begun bidding up Newport’s shares, which traded as low as $0.04 a year ago and were at $0.68 this morning, giving the company a market cap of roughly $54.644 million.

The timing was especially good for some of Newport’s shareholders.

As well, Newport granted 6 million employee stock options at $0.05 per share in December, 2013.

It is hard to predict where the next score will be in the junior resource business, however investors need to be in the game to have any hope of participating.

Congrats to all Newport longs… 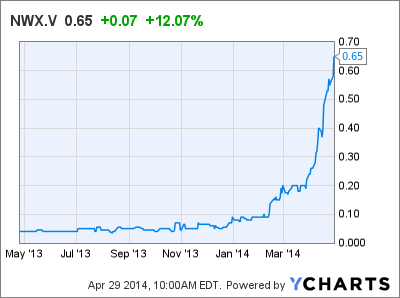