POSTED ON May 14, 2014 BY Travis McPherson
CATEGORY Australia, Nickel, Stories, Today, the world’s largest diversified miner, BHP Billiton, announced it is looking to divest all or part of its Western Australian Nickel West business which includes the Mt Keith, Cliffs and Leinster mines and associated concentrators, the Kalgoorlie smelter, Kambalda concentrator and the Kwinana refinery.  The announcement comes as nickel prices continue to soar (although have softened today) to two-year highs.  Nickel for delivery in 3 months dropped 4.6% to $20,030/ metric ton on the LME.

Nickel supply has come under pressure this year as Indonesia, the largest nickel producer, cut-off exports in January.  Nickel is up 44% YTD and 10% this week alone (although it gave back some today).  Prices were up this week after Vale suspended is nickel operations in New Caledonia.

According to some analysts, the sale of these nickel assets could bring in as much as $800 million to BHP.  The obvious candidate would be Glencore Xstrata who has shown interest in these assets before and who has the bankroll for this type of purchase.

Although most large diversified mining companies aren’t considered the most prudent salesmen when it comes to their own asset divestitures, BHP is an exception.  They sold Pinto Valley to Capstone Mining (CS:TSX) for $650 million which was a large premium to what street consensus thought they would get (Pinto Valley has proved to be a huge success for Capstone as well).

This could mean that BHP believes the nickel rally is ahead of itself and that the company see a tough future for the commodity.  Prior to 2008, nickel was a large profitable business unit for BHP, but now is breakeven at best. 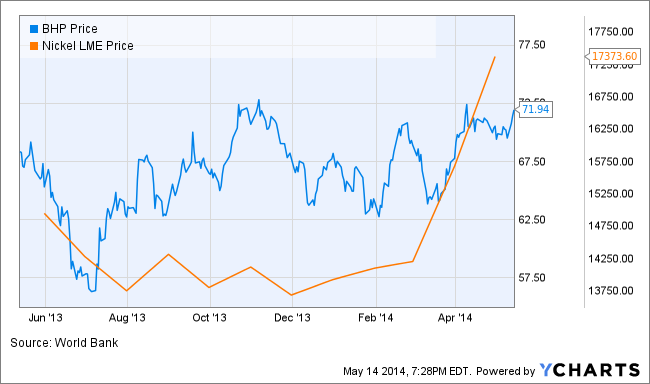