The Katanga cross used to be used in the rich copper region to buy flour, chickens and guns (Source: Rand African Art)

Robert Friedland’s Ivanhoe Mines (IVN:TSX) could get caught up, if not already, in the mess that is the South African platinum industry today.  The company filed their  mining right application for the Platreef project in June 2013 and if they do not receive it by the end of this month, all activities at the project will have to be suspended (depending on length of delay, expect write-downs).  With an election taking place and much social unrest in the country, especially in the platinum mining sector, Ivanhoe could get caught up in the politics.

If the mining right is not granted prior to May 31st, then all work including the sinking of shaft 1 and work on the pre-feasibility study will be halted pushing out all of the development timelines as well as the timing to cash flow.

Underground work at the Kipushi zinc project in the DRC is continuing with the next stage of the dewatering which will enable them to replace the winding ropes on the shaft five conveyances and re-establish the main pumping station in shaft five at the 1,210-metre level for continuing dewatering.

Ivanhoe is focused on drilling copper zones in the Serie Recurrente zone from the 1,251m level which has continued to show positive results and has resulted in the expansion of the initial program.  This new target area lies below and the east of the historical resource zone. At the Kamoa copper project, Ivanhoe is working towards pre-feasibility after completing a positive PEA in November 2013 (after-tax NPV(8%) of $2.5 billion).  Along with exploration and definition drilling the team is working to advance the geotechnical, engineering and metallurgical understanding of Kamoa for the study.  For the remainder of 2014, the company plans to drill a high-grade development area in Kansoko Sud, as well as some early-stage exploration drilling in the Kakula area south of the currently defined Kamoa project resources.

The company is under a bit of a liquidity crunch given that $145.2 million of their $149.8 million in consolidated working capital is restricted for Platreef (estimated capex of $1.7 billion).  Even if Platreef is delayed by the mining right issue, the company cannot reallocate these funds to Kipushi or Kamoa.  Meaning these two assets are principally unfunded and their plans to develop a decline at Kamoa and underground drilling at Kipushi will cease if funding is not secured sharpish. Although the financing risk is real, the fact is not only are these assets truly world-class in terms of size and grades, but also they are under the control of the single best resource developer of our time (Robert Friedland), and I would suspect financing to be addressed shortly.

At the end of the release, the potential spin-off of the South African assets is mentioned as a route the company is examining, as well as the potential for a joint venture partner on one or more of their assets.

A split may make sense and make financing the projects easier.  Investors in platinum often tend to be different than those for copper and zinc.  Separate companies may allow for more specialized financing options for each of the world-class projects.

Overall, Robert Friedland has financed billions of dollars for resource companies in a variety of ways in the past, including ones such as Oyu Tolgoi which was thought to be too large for him to finance (but he did).  I would expect no less from Mr. Friedland on this iteration of Ivanhoe Mines. 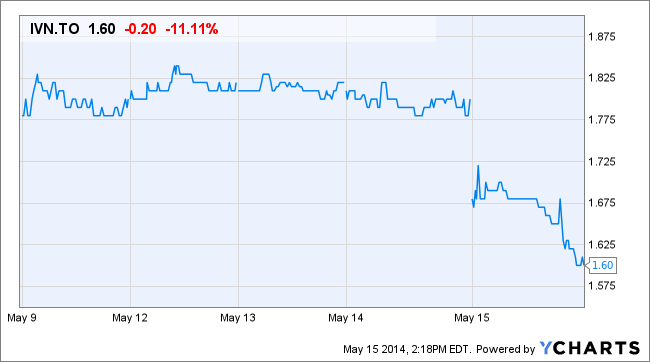 Read: Ivanhoe Mines Announces Financial Results and Review of Operations for the First Quarter of 2014