Ivanhoe Disputes Statements Made by Reuters Regarding Development of DRC Projects

As stated in our article yesterday, Ivanhoe Mines is currently (emphasis on currently) under capitalized to move Kamoa and Kipushi forward with major developments until the company secures some sort of financing for them.  However, as we stated, these two projects are absolutely world-class and they are controlled by Robert Friedland which means they will be financed in one way or another soon (joint venture, spin-off, equity, strategic investor).

Ivanhoe has supportive major investors including Ontario Teachers Pension Plan (6.8%) and Fidelity (6.3%) not to mention founder, Robert Friedland who owns over one quarter of the company, personally.

Shares of IVN closed down over 16% yesterday amid these rumors (weakness looks like an opportunity and one I will likely take advantage of today). 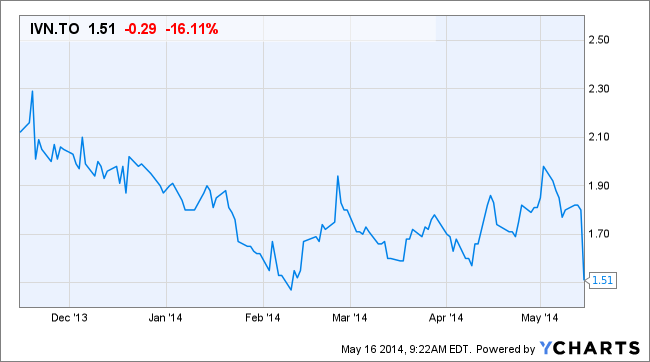 Below is a news release issued by Ivanhoe Mines this morning which emphasizes that a Reuters article which alluded to the fact that Ivanhoe may have to abandon their DRC assets, is incorrect as they have a number of options to move them forward.

A Reuters news story published yesterday inaccurately referred to an Ivanhoe Mines Ltd. news release issued May 15, 2014, that provided a review of the company’s operations and financial results for the first quarter of 2014.

The Reuters story reported that Ivanhoe Mines had “said it would not be able to develop two mines in the Democratic Republic of Congo unless it gets more funds by the end of June”. In doing so, the Reuters story misstated and misrepresented what Ivanhoe Mines actually announced in its public news release and also in the accompanying Management’s Discussion and Analysis.

Ivanhoe stated only that “the company’s main objectives for 2014 remain…the commencement of the underground mine-access decline at the Kamoa Project and the underground drilling program at the Kipushi Project.” Ivanhoe further stated that the company would require further funding by the end of June “to meet these objectives.” (emphasis added)

Reuters’ statements implied that the development of Kamoa and Kipushi is an all-at-once, or not-at-all, proposition. As any mine-development company could attest, the process of development and financing proceeds in phases. The development of the Kamoa copper discovery, the historical high-grade zinc-copper Kipushi mine, and the Platreef platinum-palladium-gold-nickel-copper project in South Africa, all have proceeded on that basis. Ivanhoe expects this will continue. The company’s disclosures merely continue to inform its stakeholders that each successive phase of development will need funding, and currently that funding is for the present phases of the DRC projects, which constitute the underground mine-access decline at the Kamoa Project and the underground drilling program at the Kipushi Project.

Ivanhoe has a very supportive shareholder base, which was affirmed last October when the company successfully raised C$108 million at C$2.00 per share. Ivanhoe also believes the market understands the value proposition behind its projects and fully expects to carry on with their funding and development in the normal course.

The Reuters story also ignored Ivanhoe’s statements that it was progressing ongoing discussions and negotiations with potential strategic investors and joint-venture parties, and that it was examining a number of corporate and project-level options, including “a corporate reorganization; project spin-offs (including potentially separating its South African platinum assets and its DRC copper and zinc assets into separately listed public companies); sales or joint ventures; project- or corporate-level debt and/or equity investments (including interim financing); and additional and/or alternative stock-exchange listings for certain of the company’s projects.”

Ivanhoe continues to examine these options to help realize the full value of its world-scale mineral projects in Africa.