Microcap in Discussions with +$10 Billion Major for Canadian Copper Project The microcap junior, Aston Bay Holdings (BAY:TSXV) is up over 30% this morning on the back of the company’s announcement that it has entered into an exclusive due diligence period with an unnamed major.  All we know about the major mining company from the release is that it has a market capitalization in excess of $10 billion.  The agreement is in reference to the company’s Storm copper and Seal zinc projects located on Somerset Island, Nunavut.

Public base metals companies with market caps greater than $10 billion include:

Based on recent exploration activities, likely candidates would be Antofagasta or Freeport (who are both actively working with juniors on exploration projects).

The exclusivity period will last until the earlier of: the execution of an earn-in agreement, the signing of an MOU or June 30, 2014.  During this period, Aston Bay will be opening the books and business to the major mining company in order to try and arrange a partnership on one or both of the projects.  Aston Bay was given $50,000 cash which would be counted towards exploration spending, should an MOU be signed.

“Aston Bay’s ability to attract the interest of a major mining company reflects the technical merit of the Storm project,” said Bruce Counts, Aston Bay’s chief operating officer. “We are eager to conclude the MOU and begin the task of advancing the property in partnership with the major.”

The Storm project potentially hosts a significant high-grade copper deposit.  Historical drill results were released in September 2013, which showed intercepts including 110m of 2.45% copper and 56m of 3.07% copper (both from surface).

Aston Bay is earning into Storm from Commander Resources (another microcap junior).  They need to spend $6 million on the project by the end of 2015 to earn 50.1% (then another $9 million to earn up to 70%, with a buyout option for an additional $15 million cash or 20% of BAY value or paying 200% of costs incurred by Commander since JV formation).

The company recently (April 28, 2014) completed a small private placement which included insiders of the company.  The financing was done at $0.20 per unit with the shares now trading at $0.29 (30% premium) after the announcement this morning.   This financing could be considered bad taste if these insiders knew of the imminent deal and took down stock knowing it would be worth more within weeks (given the materiality of the deal).

To be clear, I am unaware of what these insiders knew or didn’t know regarding the announcement this morning and the recent financing.

Regardless, this could be potentially game changing for this tiny company, if they can sign this major up to spend extensively on this early-stage copper project.  No potential deal terms were outlined, but look at deals recently signed with Antofagasta and Riverside or Freeport and Reservoir for ideas.

This could also signal the revival of exploration by majors, which has been dormant for the past 2-3 years as they focus on cash flowing assets exclusively. 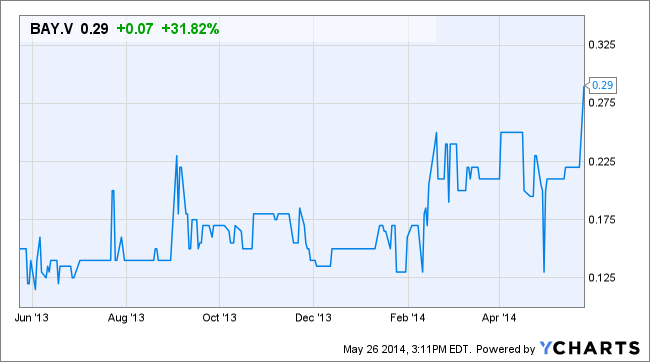