Yesterday, Australian-listed Papillon Resources (PIR:ASX) was halted at the company’s request pending a “potential corporate transaction”.  If Papillon is part of a larger producers’ M&A mandate, then it would represent the 3rd such gold transaction in the past 2 weeks.

Last week saw Rio Alto make a friendly, $300 million, bid for nearby Sulliden Gold and then the following day saw the London-listed Polymetal make a $618 million bid for the Kyzyl gold project in north-eastern Kazakhstan.  With the senior gold’s primarily out of the buying market (with exception of Goldcorp), the mid-tiers are using their free cash flow generation and relatively well performing shares to acquire underwater developers.

Given the market cap and likely +40% premium that would be paid for this project ($550-$650 million takeover range), Endeavour seems an unlikely candidate (although they do operate in Mali).

B2Gold or Randgold seem the most likely.  Randgold (GOLD:NYSE) because they operate 3 gold mines in Mali and have an undrawn $200 million credit facility which they could leverage with their outperforming stock. B2Gold (BTO:TSX) is a likely candidate, because they are always a candidate whenever gold M&A is discussed.  The company has been very active in both growing organically and by buying ounces/production.  With B2Gold having $150 million in undrawn credit and $180 million in cash, that would give them enough money to build the project should they buy.  However, buying would likely come via shares.

Typically, our corporate finance textbooks tell us that whenever a company uses its stock to make an acquisition it can mean that management believes their stock is pricey.  Randgold and B2Gold shares have both outperformed their peers.  However, with this transaction, given the quality of the asset both in terms of size, grade and stage of development, we would expect this to be accretive on most measures.

Papillon is developing the Fekola open-pit gold project in Mali which has a pre-feasibility study showing a 9 year mine-life producing 300,000 ounces of gold per year at all-in costs of $725/ounce.  B2Gold has an all-in cost profile of $1,100/oz and Randgold’s is almost $1,200/oz.  As a result, this project would lower all-in costs for both companies (but especially B2Gold on a production weighted basis). Fekola is one of the lowest quartile all-in cost projects in the world (Source: Papillon Resources)

The project hosts 43.31Mt at an average grade of 2.46g/t gold in the M&I category.  According to the pre-feas, the capital cost for the project is $292 million which includes $119 million for the plant.

The company recently announced the commencement of early works as part of their definitive feasibility study which is expected within months (if the company isn’t acquired first).

The Fekola project also fits within B2Gold’s stated mandate of paying for what you know is there and getting optionality to grow with nearby potential.  Papillon recently made a new discovery 13km from the pit which saw high-grade intercepts in 14 holes including 13m at 7.13g/t from surface.

The potential acquisition would seem expensive on a per ounce in the ground basis (at $600 million takeover would be over $140/ounce in the ground), but this is one of the best undeveloped gold projects of this size around.

Papillon is led by chairman Ian Middlemas who is a mining deal man.  He was part of the group that grew Mantra Resources into the billion dollar takeover by Russian ARMZ.  He also led Adamus Resources while it was acquired by Endeavour Mining for $645 million.

Papillon will likely remain halted now until the acquisition is either made or dissolved.  No matter who is involved in the potential acquisition (B2Gold, Randgold, Endeavour or whoever), with this high-quality of an asset on the block, there is always potential for a bidding war.

B2Gold and Randgold have both outperformed the sector (GDX) over the past year, so their stock could be used for a transaction without undergoing ridiculous dilution: 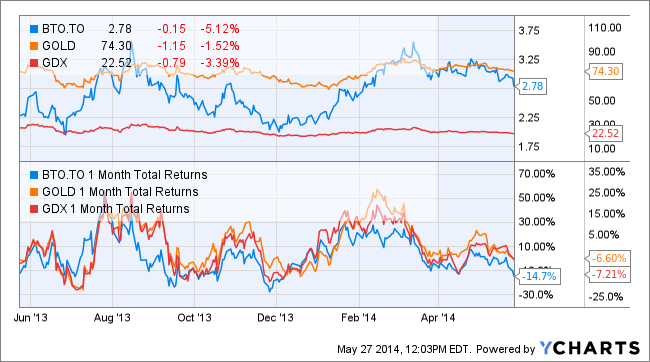