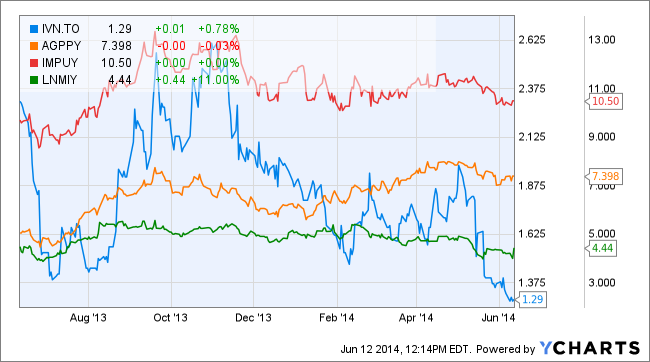 Lonmin is the biggest gainer on the news out of South Africa, up 11% today.  Anglo American, Impala and Ivanhoe all remain flat.

Reports today indicate that the long-standing strike between platinum miners and the Association of Mineworkers and Construction Union (AMCU) that has crippled South Africa’s mining industry looks to be coming to an end.  According to reports today, the labour union and three of the country’s largest platinum producers (Impala Platinum, Anglo American Platinum and Lonmin Plc) have agreed, in principle, to terms on a new pay structure for miners in that country.

The 20-week pay strike has crippled the sector, forcing the world’s largest producers of PGMs to essentially shut down operations, driving up the price of PGMs.

The AMCU has met with workers at Impala who have agreed to the main terms of a new pay package that will see wages and labour conditions improve while at the same time allowing these companies to resume full operations.  According to reports, more than 70,000 members of the AMCU have been on a pay strike since January 23.

“We are not disclosing the details until we have heard back from AMCU,” Charmane Russell, a spokeswoman for the three producers at Russell and Associates, said in an e-mail. “The process is a very sensitive one and we will ensure that we act in good faith.”

Other than the major PGM producers in that country (including Impala, Anglo American and Lonmin) the news is good for Canadian-listed Ivanhoe Mines (IVN:TSX) which has been grouped in the South African platinum basket even though they received their final mining right permit two weeks ago.

Shares in Ivanhoe continue to trade near all-time lows despite having their most significant country risk mitigated and having closed a successful $170 million financing.

Disclosure: I am long Ivanhoe Mines and am biased.