The fully-funded developer, Asanko Gold (AKG:TSX) has provided an update on its early works program and front-end engineering ahead of their Board’s final investment decision as well as groundbreaking ceremony at their Asanko Gold Project in August.

The project early works remain on time and on budget.  Asanko also provided an update on the resettlement action plan for Phase I as well as Phase II permitting.

The site access road is now nearly complete (8km out of 11km), the mining village refurbishment is 80% complete, key mobile equipment pieces have been ordered and the site airstrip has been completed and inspected by the Ghanaian authorities.

Since acquiring PMI Gold and the Obotan project (now called Phase I of the Asanko project) and consolidating the Obotan and Esaase deposits into one; management has been working to develop a plan to cut redundancies at the two nearby projects.

The plant layout has been completed which incorporates expansion plans (for the development of Phase II – Esaase).  Structural and civil designs are underway to make way for bulk earth works for the plant site to start in August.

Operating costs are in the process of being updated.  While civil, mechanical, electrical and infrastructure designs have been completed to allow the detailed capital cost to be estimated.

An updated mineral resource estimate was also completed (internally) which has increased confidence in the geological model but has not increased ounces or grade materially.  The revised estimate, detailed mine plan with updated capital costs will all be combined into a Definitive Project Plan which is expected to be completed by the end of the year (although the preliminary one will be made available to board for their investment decision in early Q3/2014).

Work is underway on their resettlement action plan which will be reviewed and approved by the Ghanaian Environmental Protection Agency by the end of the year.   Phase I is fully permitted for construction. Dynamite Hill is located within 10km of the processing facilities (Image: Asanko Gold)

The company continues to do definition drilling at the nearby Dynamite Hill zone which contains potentially higher-grade, near surface ore which could be mined as a starter pit during Phase I.

The average grade of reserves at the Asanko project is 1.73g/t whereas the Dynamite Hill zone has been intersecting grades in excess of that and provides potentially richer ore, near surface which could improve the economics of the project in the beginning (56m @ 2.00g/t, 28m @2.92g/t and 17m @ 3.07g/t).

Asanko’s CEO, Peter Breese commented on the Dynamite Hill drilling in a recent statement: “The objective of the 2014 drilling campaign is to delineate near-surface oxide mineralization at Dynamite Hill which could become an additional shallow open pit within close proximity to the planned Phase 1 CIL processing plant.”

Overall, progress is being made on all fronts and we would expect a positive investment decision with groundbreaking ceremony to commence shortly thereafter (August).  The company is still guiding first gold in Q1/2016, ramping up to full Phase I annual production of +200,000 ounces per year by the second quarter.

The company continues to check off catalysts, with the latest being the finalization of a $150 million project facility from Red Kite Mine Finance.

Shares are up nearly 50% YTD, and are approaching their late March high of $2.68: 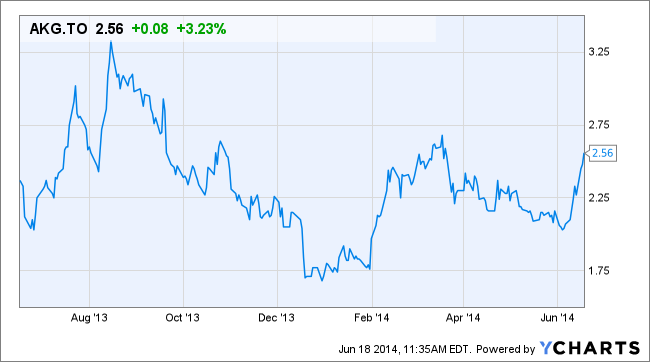