One of the challenges facing the company is the fact that the deposit is located on the bank of the Xingu River (Image: Belo Sun Mining)

While the FIFA World Cup remains the highlight of Brazil today with a couple a good matches (the Netherlands continued their winning streak with a 3-2 victory over Australia this morning); another story in Brazil is receiving attention.  This time it is Stan Bharti's Belo Sun Mining (BSX:TSX) which is developing the Volta Grande gold project in Para State, Brazil.

Sun Valley Gold LLC, a long-term gold investor that invests in companies from IDM Mining to B2Gold, has acquired 7 million shares of Belo Sun at $0.19/share out of the market.  The fund now controls over 32.8 million shares in the company (or 12.35%), making it a reporting shareholder.

Belo Sun is coming off a tough 24 month period which has seen their share price deteriorate from $1.80 a year ago, to $0.20 today.  The company had permitting delays in 2013, but was awarded their environmental approval for the Volta Grande project in December 2013 (however that permit was subsequently appealed and repealed by the Federal prosecutor who remains publically opposed to the project).

Management is working to finalize the permitting process in order to bring the large +7 million ounce deposit into production, but this looks like it is quite an onerous task that includes: training the local communities as well as convincing the suspicious locals that the project is environmentally sound (so far they have been unsuccessful at doing this).

In February of this year the company released a PEA on a staged-approach to the project's development which would see throughput slashed from 7Mtpa to 3Mtpa and average production decreased from 313Koz/year to 167Koz per year.  This was undertaken to reduce both the environmental and capital impact of the project.

Sun Valley Gold employs some very bright geologists, including former Haywood Securities banker, Nichole Adshead-Bell.  As a result, I would view this purchase as a positive sign for the story.  Although, it is always important to note the differences between your investments and the institution's (who typically have different time horizons, risk profiles and arbitrage opportunities than the rest of us).

The chart below shows that the GDXJ (junior gold miners index) decoupled and outperformed BSX starting in February of this year: 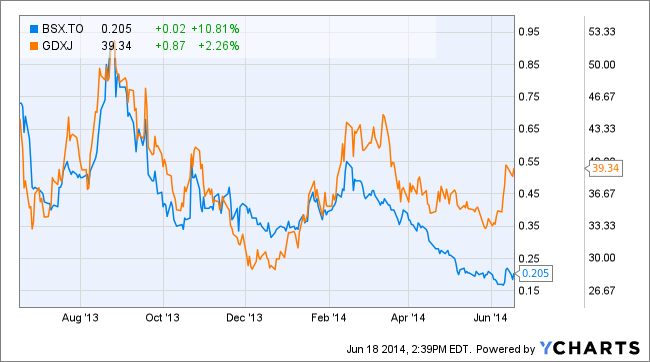