Outperforming Lucara Likely to Use Its Paper to Grow With all of the well-deserved attention of late on Lukas Lundin’s Lucara Diamond (LUC:TSX) due to their outperforming share price (continuing to hit all-time highs), the natural question would be; should they use their stock to grow?  My answer is, unequivocally, yes.

There are limited opportunities in the diamond space as discovering and mining diamonds is not a simple and inexpensive process.  With that said, in the market, there are a select number of high-quality late-stage exploration and development projects as well as a couple of producers that could be consolidated to grow Lucara into a predominate diamond producer.

Shares in Lucara, which operates the Karowe mine in Botswana, are up over 200% in the past 12 months and 440% since 2010.  They have dramatically outperformed their producing peers (Gem Diamonds (GEMD:LON) flat and Petra Diamond (PDL:LON) up 73% on the year).

With the company performing so well and with a growing cash balance to continue to pay dividends ($57 million at Q1/2014 plus the $50 million in proceeds from the latest exception stone tender), Lucara should use their outperforming paper to buy growth.  Finding an accretive acquisition is well within the capabilities of the Lundin Group as well as William Lamb, who has led the company’s growth since taking over as President and CEO in June 2009. Diamonds haven’t seen a surge in M&A activity like we have seen in gold and, more recently, copper; but there are a number of looming potential transactions that could spark activity in the sector.  Mountain Province (MPV:TSX) which is developing the Guacho Kue project could be acquired by JV partner De Beers (85% owned by Anglo American Plc) in order to consolidate ownership of the mine which is set to begin commercial production late next year.

Another potential buyout could come in a reverse fashion with the junior buying out the major’s portion.  Dominion Diamond (formerly Harry Winston Diamonds) could acquire full ownership of the Diavik diamond mine by buying out 60% partner Rio Tinto.

The two partners were rumored to be close to a deal whereby Dominion (then, Harry Winston) would acquire full ownership of the project in 2012.  Talks fell apart and the ownership structure remains, however talks could restart given Rio Tinto’s mandate to refocus the behemoth miner’s production profile.

Dominion also operates the Ekati mine, also in the Northwest Territories.

Diamond developers in Canada are also getting attention from financiers including Stornoway Diamonds (SWY:TSX) which was able to secure $944 million (in a financing package that included equity, converts, senior debt, equipment financing and a diamond stream) to build their Quebec diamond mine.

On the exploration front, Kennady Diamonds (KDI:TSX) and their Kennady North discovery, which surrounds the Mountain Province package, have seen their shares return 2.7 times to investors. Buddy Doyle, who was instrumental in the discovery of the Diavik mine, and  his Margaret Lake Diamonds (DIA:TSXV) will be flying a helicopter gravity gradiometer and magnetic survey which they hope will help in finding diamondiferous kimberlites.

Even the Lukas Lundin, the Swedish mining entrepreneur who heads the Lundin Group of Companies (which includes Lundin Mining, Lundin Petroleum, Africa Oil and many others) is involved in Canadian diamond exploration with a 19.5% stake (20 million shares at $0.15) in Gren Thomas’ North Arrow Minerals (NAR:TSXV).

Mr. Thomas, a member of the Canadian Mining Hall of Fame, is credited with the discovery of the Diavik mine (as well as Thor Lake).

The  $30 million North Arrow Minerals has multiple exploration projects across Canada including Qilalugaq in Nunavut and Redemption in the NWT.  North Arrow shares are up over 100% from their lows ($0.36) this year and 420% since the Lundin Group got involved (William Lamb sits on the board).

Lucara continues to print new highs (again today, shares are up 2.8% on over 2 million shares to $2.59 per share which is a new all-time high) and their Karowe mine will see upgrades to the processing plant be completed by the end of this year.  They are spending roughly $50 million this year to upgrade the mine’s plant in order to be able to handle the large size of the diamonds they are recovering from the deposit.

The current phase in the lifecycle of Lucara is a critical one (for any mining company).  They have a fully ramped-up mine that is generating free cash flow and now the company needs to maintain or grow their production.  Not today or tomorrow, but eventually.

Currently Karowe has a 13 year mine life (although it may very well go on for much longer), of which 2 years are gone.  As this trend continues, without significant growth from either internal or external sources, investors will discount the company each year for production depletion.

The Lundin’s are known for accretive growth and strategic transactions which have made their investors extremely wealthy.  Coming from a position of strength into a negotiation, like the Lundin Group, can be a double-edged sword.

On the one hand, you have leverage because you are in a stronger position, however, on the other hand often the opposing party demands a premium due to the fact that their counterpart (in this case Lucara) can pay.

In 2011, Gem Diamonds and Lucara were reportedly close to merging the two companies, however those discussions fell apart.  That could, potentially, resurface as Lucara is in a much stronger position than they were in 2011.

A deal with Gem would mean the company would continue to be geographically and politically contained in Southern Africa which, depending on the environment, can be viewed positively (concentrated) or negatively (exposed).

A Canadian acquisition would provide more diversity to Lucara’s production profile and could equate to investors giving the company an even greater premium.  However, the diamond scene in Canada is either very advanced and large, or much smaller and grass roots.

Given that nothing has transpired yet, I would only assume that Lucara’s management and Board have simply not yet found an accretive transaction.

Another possibility is always one of the larger producers making a bid for Lucara.  Potential acquirers could include the Russian-run Alrosa which just opened the largest underground diamond mine in the world in Russia which has netted the company over $80 billion from the open-pit portion of that massive mine over the past forty years.

Here’s the long-term chart on Lucara: 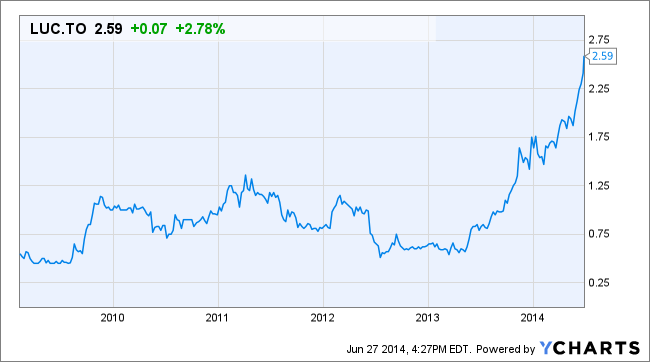 Below is a short video on Lucara Diamond Corp.

Disclosure: I am a prior shareholder of Lucara Diamond (sold too soon…kicking myself) and am a current shareholder of Margaret Lake Diamonds and as a result am very biased.