Some of the best value offered in the junior markets come in the form of junior to mid-cap international E&P’s.  These are substantially discounted to their domestic peers.  Petroamerica Oil (PTA:TSXV) is one of these junior international E&P’s.  The company released their third quarter results which highlighted the profitability of this light oil producer.  The company produced an average of 5,951bpd in the third quarter which represented quarter over quarter growth of over 18% from second quarter average daily production of 5,046bpd.  They sold a total of 558,524 barrels of oil in the quarter for total revenue of $54.8 million. The company averaged over 6,312bpd over the month of October which is the new high water mark.  PTA is guiding an average production rate of 5,000bpd for 2013 which they are surely to exceed considering that average production, YTD, is approximately 5,255bpd.

PTA sold these barrels at an average price of $108 per barrel and generated operating netbacks of $78 per barrel over the quarter.  On the back of this, the company generated per share earnings of $0.03 ($18.2 million) and positive cash flow from operations of $0.06 per share ($34.1 million). While the company continues putting out quarter over quarter of profitable growth, the company’s value is not bridging the valuation gap.  Considering the recent M&A activity in Colombia’s light oil fields which are seeing Pacific Rubiales (PRE:TSX), amoung others, absorbing as much light oil assets as they can, the company’s value is not reflecting that.  Light oil is of the utmost strategic importance to heavy oil producers in Colombia (and elsewhere), such as PRE, because light oil dilutes their heavy oil product which significantly decreases their transportation costs.

PTA spent over $17.5 million in the quarter, focused solely in Colombia and mainly in the Llanos Basin.  PTA participated in the drilling of four development and appraisal wells: Las Maracas-10, Las Maracas-11, Las Maracas-12 and Las Maracas-14, resulting in four oil producing wells.  They also drilled the La Casona-2 well which has been cased and is awaiting a workover rig to begin testing the Mirador Formation.  A long-term test production facility for the La Casona-1 well has been commissioned.

PTA spent over $17.5 million in the quarter and expects to spend $80 million over 2013, which is completely self-funding.  They expect 2014 to be self-funding as well and will release their 2014 guidance in the next few weeks.  PTA is currently sitting on $77.9 million in cash and with continued strong oil pricing, that should grow.

The company is trading at an enterprise value of $34,000 per flowing barrel of oil which is roughly half that of their Colombian peers and even less when compared to domestic North American companies.  PTA continues to exceed expectations; they are guiding over 10,000bpd in 2014 (58% upside from current levels) and 15,000-20,000 by this time in 2015. PTA is working to increase its operatorship

If PTA continues to trade at the current discounted EV/flowing barrel, but grows average daily production to 10,000bpd next year; then the shares of PTA should trade north of $0.65 per share (low end).  Add to that the fact that the company is working to becoming operator on more of their blocks, this should help to close the valuation gap (companies without operatorship are discounted because they do not have control of their own programs and are less desirable for takeovers).  The company recently increased its working interest from 25% to 100% in the exploration area of the El Porton Block with the objective of drilling the Crypto-1 well early in 2014.

Although the company is set to hit the important 10,000bpd mark next year and is, at the same time, increasing its operatorship, the shares do not reflect the growth – here’s the 5-year chart: 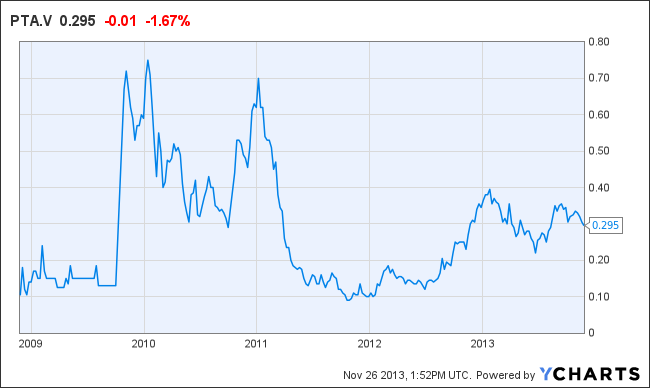 Disclaimer: We are investors in PTA since Sept, 2012, and therefore biased with regards to the company. The guidance set by PTA contains forward looking statements. This post contains opinions and no professional or investment advice of any kind. All facts to be verified by the reader. Always do your own due diligence. Thank you.