Albania’s largest foreign investor, Bankers Petroleum (BNK:TSX) is continuing to bet on its Albanian oilfields by announcing they intend to spend at least $313 million in capital next year up from the $247 million the company spent in 2013.  The bulk, $216 million, is to be spent on drilling 150 to 170 wells on the company’s Patos-Marinza Field.  90% of this will focus on production growth and 10% will target new reserves.  Included in the drilling budget is $15 million for re-activation and work overs of old wells.  The Patos-Marinza oilfield is Europe’s largest onshore oilfield with in excess of 214 million in 2P reserves.  Bankers holds 100% working interest in the field and hold operatorship.

The company plans on spending an additional $76 million on building facilities and infrastructure at their fields including three water disposal wells.  With the $313 million capital program the company is guiding 10-15% production growth over 2013 average production of 19,000boepd.

Banker’s has secured 70% of their projected 2014 crude production in term contracts at 81% of Dated Brent.  This allows the company to fully finance their 2014 capital program through internal cash flows and existing credit facilities.  They have $41 million in cash and an additional $124 million in available credit.

Bankers plans to spend $4 million on drilling two horizontal wells in their KuAparagraphova oilfield which is expected to produce light oil.  They may adjust their spending depending on developments at this field.  They have also submitted an application to enter into a 2 year, phase 2 exploration program on their Block F which the company expects to host vast amounts of natural gas. David French, President & CEO commented, “Our 2014 capital budget extends on Bankers three key strategies of disciplined growth through drilling, validation of our enhanced recovery potential, and expanding our operating margins. We have put together a balanced spend profile to deliver reliable in-year production growth, and at the same time build on our understanding of the prize of further development over the next decade.”

Banker’s hosts a 1P and 2P reserve life index of 21 and 34 years, respectively (139 million barrels and 226 million barrels in 1P and 2P reserves, respectively).  Since Banker’s took control of the Patos-Marinza oilfield in 2004, they have grown production from 400 bopd to over 19,000bopd today.  The field has responded well to horizontal wells which is now responsible for 15,000bopd of their total 19,000bopd production today.

The company trades at roughly $50,000 per flowing barrel and $4.40 per 2P reserves.  The company suffers from a sub-sector which has been discounted for some time.  International E&P’s have been discounted versus their Canadian peers, despite having better netbacks, more productive wells and often more attractive political regimes.

Given that in 2009-2011, the company traded at nearly $10 per share due to investor appetite for international E&P’s, you could expect a similar valuation, when appetite returns. 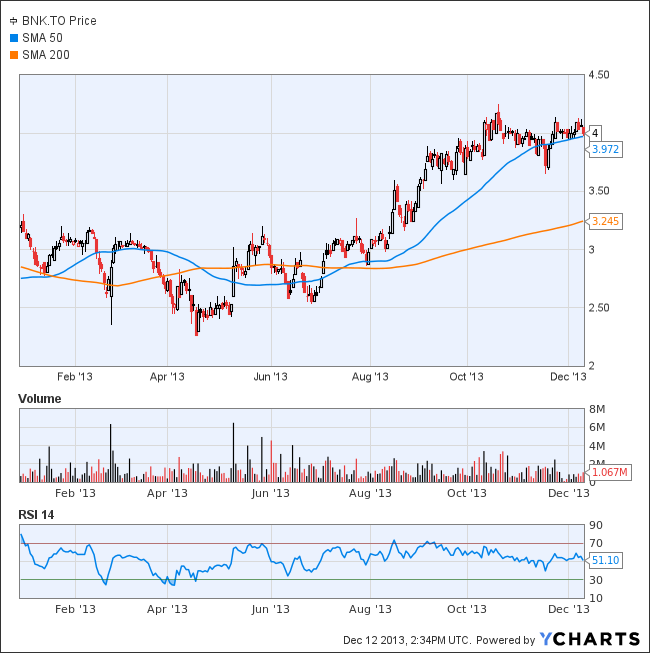