Lucara Diamonds (LUC:TSX), the African diamond producer and Lundin Group company, announced its 2014 operational and financial outlook.  The company is forecasting revenues of $150 – $160 million in 2014 on 400,000 – 420,000 carats of diamonds being sold.  This includes the assumption that Lucara will have two ‘exceptional’ stone tenders, although this may be conservative given they had four in 2013 and appear to be continuing that trend into 2014.  However, given the downtime associated with making the upgrades at Karowe, Lucara is little growth in terms of ore processed in 2014 from 2013.  In 2015, the company expects processing to increase to 2.5 million tonnes from the 2014 estimate of 2.2 – 2.4 million tonnes.

Lucara is expecting costs to be in the $31 to $33 range which is up from the 2013 estimate of $23 per tonne.  The reason for the sharp increase in operating cost is due to an additional 4.5 million tonnes of waste mined during the year.  This excess waste is simply due to the structure of the kimberlites and was forecast in the company’s feasibility study.  The Karowe mine plan, therefore, expects more that 10 million tonnes of waste will be stripped and stockpiled or used to expand the tailings in 2014.

The company is expecting to spend just over $50 million this year on upgrades to Karowe in order to allow the mine to process the large diameter stones they have been mining.

William Lamb, President and CEO, commented: “In 2014 it is expected that the scheduled plant upgrade, largely funded from the company’s 2013 year-end cash balance will be completed and brought on-line to deliver sustainable diamond recovery for production of 2.5 million tonnes per annum for the remainder of the mine life. This upgrade will also include processes to ensure the safe recovery of the value driving large and exceptional diamonds of Karowe.”

In order to continue processing ore at the intended rate of 2.5 million tonnes per year, the Karowe plant had to be upgraded and modified.  As discussed in the AK6 43-101, plant modifications (additional crushing capacity) are required as the primary kimberlite requires more energy to crush or mill to liberate the diamonds.

Due to the large-size stones which were repeatedly recovered in 2013, but were not estimated in any of the studies conducted by the company, the plant had to also be modified to accommodate those stones.  Effectively, the stones were so large that they were being filtered out of the process and, without the temporary fixes being completed by the company, would have been missed altogether.  That issue (albeit a good one to have; too large of diamonds being recovered) will now be addressed and fixed in 2014 with the capital budget being allocated to the plant.

The company was sitting on roughly $40 million cash at December 31, 2013 and had an undrawn $25 million credit facility.

In late-November, Lucara announced its third successful sale of exceptional diamonds from the Karowe mine. 14 stones totaling 1,128 carats were sold for gross revenues of $22.9 million ($20,280 per carat). The highest value stones sold were a 256.6 carat and a 137.9 carat diamond which sold for $4.40 million and $4.28 million respectively. An additional 7 diamonds sold for more than $1.0 million each.

On the back of these tremendous diamond sales, the company was up over 150% in 2013, a feat not met by many in the resource business.  Here’s the chart: 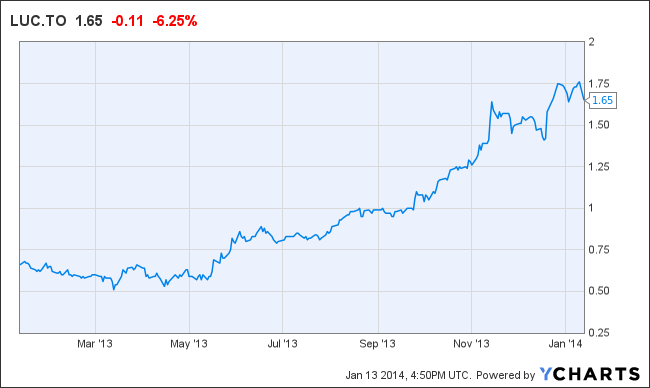 RELATED STORIES
Ivanhoe Disputes Statements Made by Reuters Regarding Development of DRC Projects
May 16, 2014 6:30 AM
Ivanhoe Shares Fall on Capital Concerns, but Don’t Count Friedland Out
May 15, 2014 11:45 AM
AOI – Africa Oil Arranges $450 Million Brokered Private Placement
October 16, 2013 10:15 AM