McArthur River is the largest high-grade uranium mine in the world with grades 100 times greater than the global average (Photo: David Boily/AFP/Getty Images)

Skyharbour Resources (SYH:TSXV), the Patterson Lake South (PLS) explorer, is diversifying outside of the PLS play by acquiring a 60% interest in the Mann Lake project located on the east side of the Athabasca Basin.  The exploration project is roughly 25km SW of Cameco’s (CCO:TSX) McArthur River mine and 15km along strike from their Millennium deposit.  Skyharbour will pay Canterra Minerals (CTM:TSXV) $15,000 cash and issue them 1 million shares to acquire the 60% interest.

Given the geology of the Basin, as you move West from the east side walls of the sandstone the uranium hosting rocks deepen.  As a result, the potential mineralization at the Mann Lake project is deeper than in the PLS.  However, this project adds depth to Skyharbour’s asset portfolio and enables it to diversify outside of its four-way joint venture on their Patterson Lake South project called the Preston Lake Project. The Mann Lake project has previous work completed on it, including 5,400m of drilling as well as geophysical work.  This drilling intersected a 4.5m zone of anomalous boron in the sandstone.  The geophysical surveys identified basement conductors and structural corridors containing reactivated basement faults. These features appear trend onto the adjacent ground held by Cameco.  Boron enrichment is common at the McArthur River uranium mine and, along with illite and chlorite alteration, is a key pathfinder element for uranium deposits in the basin.

Jordan Trimble, President and CEO of Skyharbour, stated: “The Mann Lake uranium project boasts highly prospective geology and geochemistry and a robust discovery potential as identified by the historic work consisting of over $3-million in exploration expenditures, with additional work recommended on a number of untested targets.”

The company has roughly $700,000 which they expect will get them through the next 6-8 months, including the next phase of work at their Preston Lake project.  This will include a ground gravity survey.

Fission (and previously Alpha) were able to delineate their targets at the PLS project using resistivity surveys.  Skyharbour and their joint venture partners are opting for gravity surveys.  The goal is to pick up relative gravity lows where the leaching and replacement of basement rocks by hydrothermal basinal fluids creates a density contrast.

The company hasn’t announced plans for the Mann Lake project, but Jordan told me by phone that “the company remains focused on Preston Lake but now has the option to diversify to the east side of the basin where exciting work is being done by Cameco.”

Preston Lake should see an initial drill campaign by March (which the company is funded to complete as well).  Skyharbour only has to spend $1 million of the budgeted $6 million in work to be completed on the project over the next couple of years.

Skyharbour was up over 100% for 2013 and was a top performer on the TSX Venture Index. 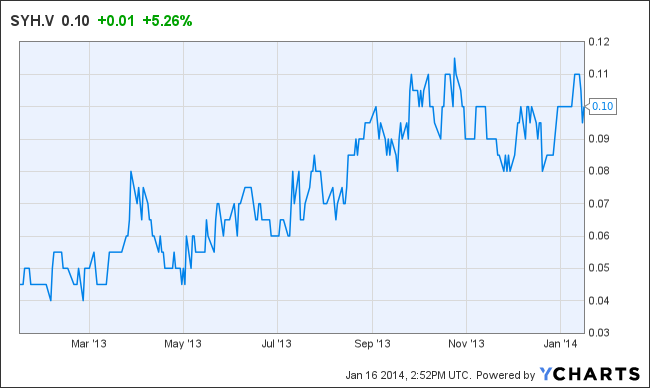 Disclosure note: Skyharbour is a client. This is an opinion an not advice. Do your own due diligence and please read our full disclaimer.