Silver Bull Resources (SVB:TSX) provided investors with a recap of the developments they undertook in 2013 which saw them produce an initial preliminary economic assessment (PEA) at their Sierra Mojada silver-zinc project in Mexico.  They also updated the company with their plans for 2014.  The company will aim to derisk Sierra Mojada through advancing permitting including water rights, surface title and environmental permitting (full environmental permit cannot be granted without feasibility study) while maintaining fiscal prudence until the market conditions improve.

They have elected to spend their remaining capital efficiently in an attempt to save shareholders from dilution while still being able to advance the project in important, but less costly ways.  Silver Bull will hold off starting a pre-feasibility study until market conditions improve.  Given the challenging capital markets, this move to slow the pace of development of Sierra Mojada should be viewed positively.  They will be able to advance the project without spending many millions on another technical study which wouldn’t add much value at this point given the difficulty in finding capital.

If the market improves, they expect to drill test a number of prospects they have identified outside of the main mineralized area including Palamos Negros which is 9km west of the Shallow silver zone.

In 2013, Silver Bull updated their resource estimate which saw them increase indicated silver ounces by nearly 100% to 163.4 million ounces of silver at 71.5g/t Ag.  The zinc component increased by over 90% to 2.1 billion pounds at 1.34% Zn.  The company used this resource estimate as the basis of a PEA which was released in November and outlined a 8,500tpd operation producing roughly 5.5 million ounces of silver and 65.4 million pounds of zinc per year at an average cash cost of $6.58 per ounce (net of byproducts).  The capex came in just below $300 million.  Using a $23.50 per ounce silver price and $0.95 per pound zinc price, the before-tax NPV(5%) equated to $641 million and an IRR of 27%.

The company highlights the fact that they remain bullish on silver and zinc especially given the recent increase in zinc prices from $0.84 to $0.95 per pound on increasing concern over supply shortages.  Many zinc mines have come offline and will come offline in the near-term and many in the sector are expecting a supply shortage to positively impact the price of zinc over the next few years.  This will also make zinc projects more easily financeable in the near-term which would be positive for the Sierra Mojada project given its large zinc component.

The company is sitting on $5 million in cash which it expects to carry them through 2014 and into 2015 given their current outlook.  Silver Bull also signed a letter of intent to sell its Ndjole license in Gabon, which could will add $1.5-million in non-dilutive capital to the company’s cash position.  The company spent roughly $6 million in 2013. 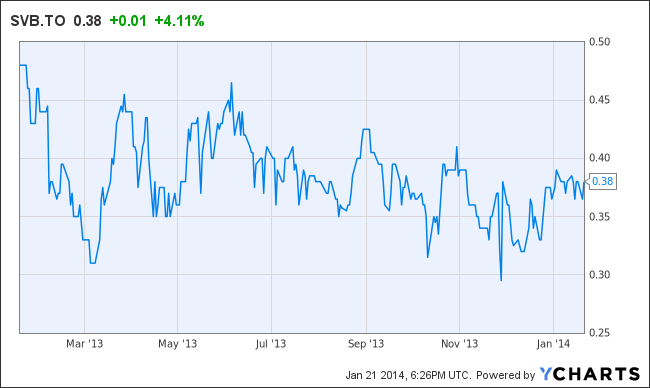 [Disclosure: Silver Bull is a client and we own shares in the company]