Canacol expects to grow production by 30-40% this year by spending $150 million(Photo: Daniel Acker/Bloomberg)

Colombian E&P company, Canacol Energy (CNE:TSX) released the results of their Mono Arana 2 appraisal well today.  The well is located on the VMM2 block which Canacol holds a 20% working interest in and is operated by 80% holder ExxonMobil.  The Mono Arana 2 well was drilled in the Middle Magdalena Valley of Colombia and was spud on December 10, 2013.  The well encountered 244 feet measured depth of oil pay in two conventional sandstone reservoirs within the Tertiary Lisama Formation.  This formation produced 1,043bopd (gross) in the Mono Arana 1 well which was drilled 700m to the north.

A jet pump has now been installed in the Mono Arana 2 well and will be placed on long term production testing. Charle Gamba, President and CEO of Canacol, commented “We are pleased to have encountered a thicker section of Basal Lisama sandstone oil pay in Mono Arana 2 than we encountered in the Mono Arana 1 discovery well without encountering any sign of bottom water. This indicates that the Basal Lisama pool is larger than we had anticipated based only on the Mono Arana 1 well results, and we eagerly await the results of the 5 remaining appraisal wells to define the size of this significant oil discovery, 2 of which are in fulfilment of ANH requirements. In any case, we anticipate that Mono Arana, along with our recent Leono light oil discovery in the Llanos basin, will be important drivers for production growth throughout 2014”.

The company has another five wells to drill as part of their appraisal program for the area.  They also have to build the production facilities related to the appraisal and development of Tertiary aged Lisama sandstone at the Mono Arana discovery.

Last week Canacol announced its budget for 2014 which includes $117 million in capital being spent in Colombia ($150 million total).  This capital spend includes building out production from the recent Leono and Mono Arana oil discoveries in Colombia as well as executing an oil and gas focused conventional exploration program in Colombia targeting lower-risk prospects on their blocks in the Llanos, Upper Magdalena, Lower Magdalena and Caguan-Putumayo basins.  The company expects to grow production by 30-40% to 11,500 – 12,500boe/d over the year.

Canacol shares were up 125% in 2013 as the company continued to have success in the prolific Colombian light oil basins including the Llanos Basin. 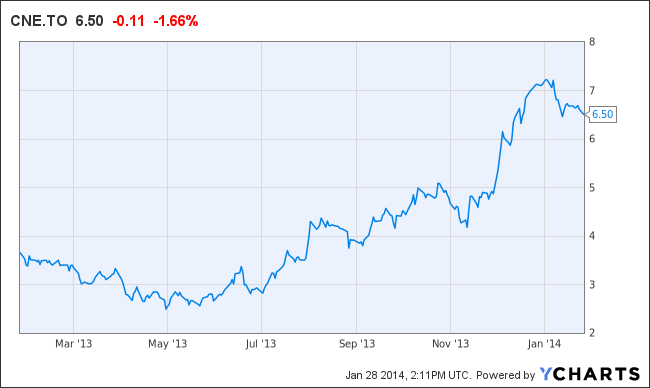