CTT – Citation Resources: the Cheapest House on the Best Street 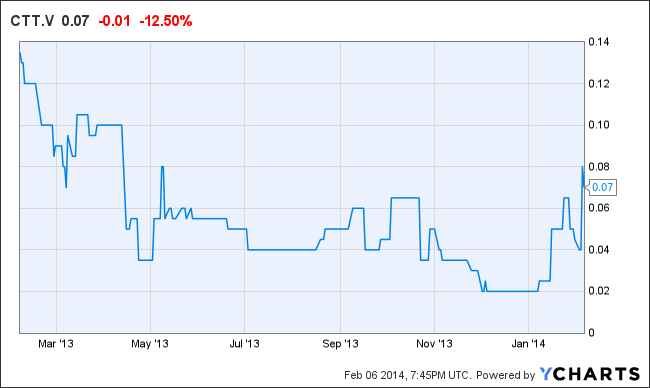 There are numerous mineral belts endowed with many millions of ounces of silver and gold throughout Mexico.  However, none are more prolific than the Guerrero Gold Belt which is home to a significant amount of Mexico’s total gold reserves.  The belt extends over 80kms through the southwestern part of the country, in the state of Guerrero.

Mexico is the tenth largest gold producing country in the world and is the fastest growing in terms of annual production growth.  The Guerrero Gold Belt is the highest grade and fastest growing gold producing region in Mexico.  This belt is host to one of Mexico’s largest gold mines, Goldcorp’s Los Filos mine.  This massive open-pit and underground mine hosts over 7.4 million ounces of gold and another 52.5 million ounces of silver in reserves and is expected to produce nearly 350,000 ounces of gold this year.

Located to the north of Los Filos are Torex Gold's (TXG:TSX) two discoveries: El Limon/Guajes (4.09 million ounces at 2.61g/t gold) and the newer Media Luna (5.84 million gold equivalent ounces at 4.55g/t AuEq), which are amoung the highest-grade open-pit gold development projects on the planet.  Since inception, Torex has raised over $800 million in equity and has another $250 million ready in a project debt facility.  Interest in the Guerrero Gold Belt hasn't felt the downturn like many other places due to the grade and size of the potential deposits there. Entry into this area is exclusive.  It is expensive and/or difficult to acquire a decent land package, especially now that Osisko has entered.  Last year, Osisko (now the focus of a $2.7 billion takeover by Goldcorp) acquired the largest single land package in the district, approximately one million hectares.  Details of their acquisition have been scarce as they are rumoured to still be staking land in the area.  To date, most of the major exploration work in the southern part of the belt has only extended as far as Goldcorp's land.  This marks the bottom of what is known as the Morelos National Mining Reserve, a 47,600 hectare federal mineral reserve.  To the south-southeast of the Reserve sits land which is believe to be the extension of the Guerrero Gold Belt mineralization, but has largely been underexplored (partially due to adequate targets to the north).

Citation Resources (CTT:TSXV), a micro-cap explorer, has a large land package contiguous to the west of Goldcorp and Torex called the Biricu project.  In November 2011, Citation optioned 100% interest in the project from Esperanza Resources (now Alamos Gold).  Under the terms of the agreement Citation paid $20,000 cash upon closing.  The company has four years to complete $4 million worth of exploration with $250,000 being committed to the first year (now completed).  They would also issue 1,050,000 shares to Esperanza over the four year period.  Esperanza would retain a 2% NSR royalty and appoint a director.  They chose their Chief Geologist Dr. Paul J. Bartos who was instrumental in many of Esperanza's discoveries and remains on Citation's board today.

Citation is currently led by Matthew Watson, a lawyer by trade, who has a long track record of building and selling companies in the private and public sectors.  They are currently looking for a technical CEO to oversee on the ground operations including drilling.

Please contact CEO.CA if you believe you are qualified for the position. Management tells us they are in the final steps of transferring the option agreement to Alamos.  Once that is complete, management expects to receive the drill permits (expected by end of Q1/14).  Citation recently announced they have been granted a formal access agreement with a local Ejido group.

Most of this area is green fields and has had limited exploration work done on it to date (with the exception of the work Citation has done).  It is believed that Biricu property contains identical reactive carbonate and sandstone host rocks as known deposits in the region. In early 2012, a systematic stream and rock sampling program along with geological mapping took place on the project under the guidance of David Jones.

Mr. Jones is a leading Guerrero Gold Belt geologist and is credited with the discovery of the Los Filos gold deposit. With his guidance the company has focused on the important intrusives which are associated with the major gold discoveries in the area. Citation has identified 4 targets and plans to drill 7,000m to test them this year (Image: Citation Resources Inc)

Citation has identified four targets that will be the focus of a 7,000m drill campaign this year.  They plan to drill 2,500m into each of Punto Rojo and Northern targets and another 1,000m in each of Milpillas and Southern (La Curva) targets.  These areas confirm the previous work done by Mr. Jones and involved geochemical and geophysical data to evaluate the last VTEM survey completed on the project. The company has to spend $1 million this year under their option agreement.  These will be the first holes drilled into the project.  The company intends to raise a few million dollars to complete the program within the next few months.  Management has good capital markets visibility and should be able to raise the money.

Citation has been focused on conserving capital and their management team currently takes no salary and they have no offices.  Management tells me they are focused on maintaining a low G&A-to-exploration dollar ratio.  Market sentiment towards some selective juniors is improving and you're seeing the 'smart' money starting to re-enter the space (see Canadian securities legend Bob Disbrow is buying Caracara Silver at two and a half cents).

Citation is very early-stage and as is always the case with these, the drill bit is in charge.  Their planned 2014 drill campaign should be adequate to determine whether they are onto the next major Guerrero Gold Belt discovery, or not.

Please visit their website for more information at: www.citationresources.com