This morning, Pretium Resources (PVG:TSX) hosted a web conference from Toronto’s St. Andrews Club which was intended to shed light on the Valley of the Kings resource estimate at their Brucejack project.  The presentation was led by Ivor Jones, an Executive Consultant with Snowden Mining Industry Consultants as well as Robert Quartermain (President and CEO, Pretium), Dr. Warwick Board (Chief Geologist, Pretium) and Kevin Torpy (Director, Mining Engineering, Pretium).  The presentation was used to provide clarity and to reassure investors on the technical merits of the December 2013 Valley of the Kings resource estimate.

The presenters went into significant depth with regards to the statistical methodologies used in the resource estimation procedures.  Snowden utilized the Multiple Indicator Kriging technique for grade calculation and resource estimation.  This estimation is used when there is risk of significant skewing (positive or negative) in the data or non-normal grade distribution.  In the case of Valley of the Kings where you have extremely high-grades mixed with lower grade materials (grade variability high), this method is the most accurate.  This method has been used at Telfer (Newcrest Mining), Agbaou (Endeavour Mining) and many more.

Overall, this method has increased the confidence of the 2013 resource estimate as compared to the 2012 estimate through a reduction in smoothing of grades as well as confirming the overall geological model.  The mineralization, predominately, trends east-west and has been mainly drilled with that in mind.  Due to this, the estimate is still believed to be conservative because limited north-south delineation drilling has been done.

As a result of significant information gained through their Bulk Sample test and significant underground drilling as well as now knowing more about the techniques used for averaging the grades in the various domains, we are more confident in the validity of the model.  The company believes it has proved the continuity of stockwork on strike, across strike and vertically. In late 2013 the company announced the results of their 10,000 tonne bulk sample program which they were anticipating roughly 4,000 ounces of gold from based on their resource estimate (13.5g/t gold).  Pretium beat that estimate by producing a total of 5,865 ounces of gold, implying a average grade of ~20g/t gold.  The company intends to sell their gold which could yield them $7.5 million ($1,291/ounce Au price).  As per the December 2013 Valley of the Kings Resources estimate, that deposit hosts 15.3Mt at 17.6g/t gold containing 8.7 million ounces of gold in the Measured category and another 5.9Mt at 25.6g/t gold containing 4.9 million ounces in the Inferred category.

With much of the unknowns surrounding the geological characteristics of the super high-grade veins and stockwork, the company is now looking ahead towards permitting.  Brucejack is located in BC and is currently planned for a 2016 production start.  The company has selected Longhole Open Stoping for mining at Brucejack due to the fact mineralization is steeply dipping and comprised of vein stockwork.

As the company continues to regain investor confidence, shares continue to rise.  Here’s the six-month chart: 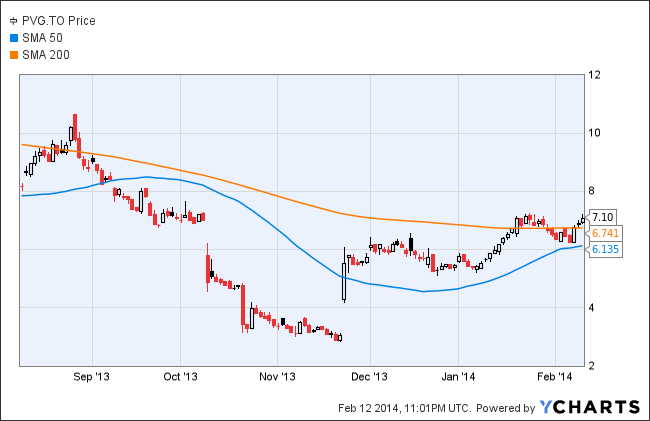