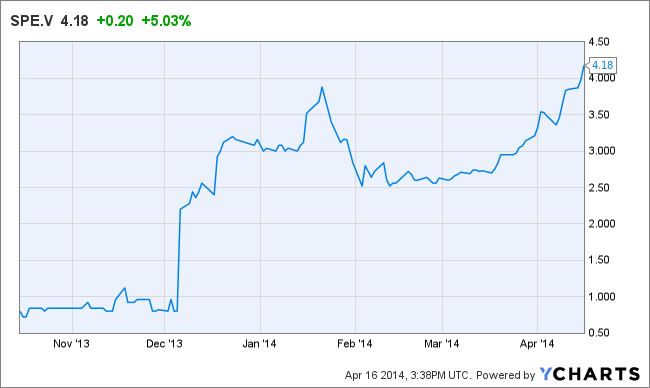 The recently consolidated Spartan Energy (formerly Renegade Petroleum and Alexander Energy) has provided their first post-merger quarterly production and drilling update.  The company has been garnering a lot of attention from institutions and analysts abroad due to the underappreciated assets that have been removed from Renegade and put into the capable hands of the new Spartan Energy team.

Spartan’s team is the same team that have had two previous iterations of the Spartan name, both being sold out.  Most recently, in January of 2013, they sold Spartan Oil to Bonterra Energy for $480 million.

Spartan drilled a total of 19 wells (17.5 net) in the first quarter of 2014 with 3 vertical wells drilled in Central Alberta, 10 horizontal wells in the Viking (West Central Saskatchewan) and 6 horizontal in the Mississippian prospect (southeast Saskatchewan).

For the Alberta wells, Spartan is estimating 30-day IP rates of 70bopd.  Two of the three wells there are currently in production.  In the Viking play, the company has had a 100% drilling success rate with their horizontal wells.  Nine of the ten wells there are completed and are at various stages of stimulation and clean-up.

In the Mississippian, they have completed four wells which have been in production over 30-days with average rates of 189bopd.  They have drilled a total of ten wells into the Queensdale property with average production rates across all ten of their wells being in excess of 195bopd.  The average cost to drill is roughly $1.1 million per well.

The company is currently producing roughly 6,600boe/d (93% light oil), which includes the former Renegade assets.  The company is planning to focus, heavily, on their Mississippian oil play with 35 horizontal wells (30.9 net) planned for the Frobisher/Alida formation during the year and an additional nine wells planned for the Midale formation.

They expect to drill 11 (10.5 net) horizontal wells into the Viking this year as well.